I need an iPod or something.  That way, I don’t have to put my fingers in my ears and sing “la la la la la I can’t hear you”, which I literally did on Wednesday.

Yes, I really did that.  And, though it was done humorously, I did it so I wouldn’t have to hear what I knew was going to be a bunch of pro-Trump drivel from…

…yeah, one of those entitled seniors I wrote about last week.  He’s also the guy who shouts into the microphone at every monthly meeting of the volunteer organization I belong to, when he “leads us all in prayer” before lunch.  He can hear fine, he just shouts a lot, because he’s one of those people who seems to think that “louder” means “important”.

I am going to back up here a bit.

Those who read my Facebook posts were subjected to the shorter version of what happened in my life on Wednesday (feel free to skip).  I had to attend an awards lunch – yes, it was mandatory and yes, I paid the van service $6 for transportation to/from the lunch – which, like all meetings of this volunteer organization, is held in a church.

The senior organization that administers this volunteer program (which is federal) actually owns and runs the van service – but they won’t transport anyone under 65 for free for their mandatory meetings.  It’s ridiculous, and they won’t give any explanation, they just say “no”.  They reimburse gas mileage to people who drive, but do not pay for or reimburse van costs or bus fare.  It doesn’t make any sense to me.

So I walked into the church common room, or whatever they call it, and the first thing I saw was this: 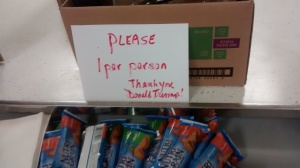 This is a picture of the “snack table”, where the volunteer organization leaves breakfast bars for us, since the damn meetings start at 8:30 or 9 am.  In case you can’t read this sign, it says “please 1 per person Thank you “Donald Trump” (sic)”.

I suspect it was the pastor of the church who wrote this, because he is present for every meeting (even though he isn’t a member of the program) and he fancies himself a funny guy who occasionally makes jokes about President Obama and “liberals”.

He’s a Methodist minister.  I used to attend a Methodist church, years ago when I was married (long story for another time), and the minister of that church wasn’t anything like this man.  In fact, the Methodist churches in Memphis tend to be fairly liberal.

I don’t know why he should care if anyone takes more than one bar, because as far as I know he doesn’t buy them.  But…seniors are really like children, you see, and it’s up to him to make sure we obey all the rules. *Rolls eyes*

The program started out with door prizes.  Oddly, in the middle of this, the pastor walked up to the front, took the mic from the volunteer coordinator (who is a member of his church, by the way) and announced…

“There’s been a bus accident.”

Everyone gasped.  As you do, if you think “oh I know people who ride the bus” and so on.

He continued, “It was Hillary Clinton’s campaign bus.”

It dawned on me that this was a joke.  Ha…ha…ha.

He then said, “Three boys pulled Hillary out of the bus.  She says to them, ‘Since you saved my life, I’ll reward you with anything you like.’  He describes what the first two boys want (a car and something else) and said, “The third boy asked for a tombstone.”

His punchline?  “Hillary asked, ‘why a tombstone?’  Because, the boy said, when my father finds out I saved you, he’s going to kill me.”

Everyone laughed heartily, except for the two African-Americans in the room, and me.

The pastor walked back to where he usually stands at the back of the room, a smug smile on his face.

He had to pass me on the way.  I asked him, “Why did you say that?  Not everyone here is a Republican, you know.”

He looked at me as if I had two heads, and kept right on walking.

The other people at my table looked horrified, because I had spoken to the pastor that way. Two of them were my friends (or so I thought) with whom I went through training.

I explained, “There are Democrats in this room, I bet, and Hillary supporters too.  Plus, this was inappropriate, this isn’t the place for partisan politics.  I found it offensive.”

Again, I got the “she’s got two heads” look.  And no response.

Yes, my day was off to a bright start.

The rest of the morning was fairly uneventful.  I won a gift card to a local gas station.

I guess I will give it to Nancy Downstairs.

The volunteer coordinator and her assistants, in their usual bumbling way, had not prepared enough door prizes for everyone.  Now, that caused an uproar with the people who didn’t win anything.   They were threatening to write letters (to whom, I have no idea), draw up petitions, and call their local politicians.

I’m serious.  They really did say these things.

Violate church and state?  Who cares?

Lunch time rolled around – yay, it’s not Meals on Wheels this time – and the volunteer coordinator announced on the mic, “Come lead us all in prayer, Jack.” (Not his real name, by the way)

Jack obliged and shouted into the microphone, ending (of course) with “in Jesus’ name”.

I was so glad he didn’t ask his god to bless Trump or make any political references.  So glad.

Of course, everyone bowed their heads except for me.  I keep hoping one day I will find another person who doesn’t do this, so I can befriend him or her.

While standing in line for lunch, my “friends” and I passed Jack, who was on the verge of telling the “friend” behind me why he voted for Trump.  That’s when I did the finger in ears la la la thing.  That got a few laughs but it really helped me, because I truly could not hear Jack.

“What a blessing”, as they say in Memphis.

After lunch, we were “treated” to the musical stylings of an Elvis impersonator.  Who, for some odd reason, didn’t impersonate Elvis, he just sang some of his songs.  He played guitar and warbled (pretty badly, I might add) accompanied by recorded music.

And there was Jack, in the back, shouting out “Play (insert title of Elvis song here)!” after every song.  Thankfully, he was ignored.

But then it got worse.

Mr. Elvis Impersonator Who Isn’t Really then began to play gospel songs.  And, of course, the majority of the brainwashed seniors sang along, off-key, or just shouted the lyrics.

One of my “friends” turned to me and said…

“I’m not Christian,” I replied.

She laughed again, and then turned away.

© Victoria Pomeroy and Victoria's Viewpoint, 2014. Unauthorized use and/or duplication of this material without express and written permission from this blog’s author/owner is strictly prohibited.
%d bloggers like this: