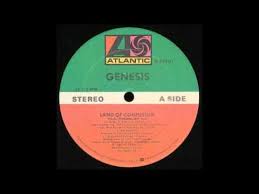 Most of us recall a song called “Land of Confusion” by Genesis, and the video of that song featuring puppets.  My kids loved it.  They are all still Genesis fans to this day (as am I).

I was reminded of it lately because I find what’s happening these days with 45 and his band of idiots more confusing than usual.

Until now, everything 45 and the Republicans did/said made sense in terms of political and/or monetary gain.  Everything.

Side note #1: I won’t get into the clinical aspects, because, quite honestly, I don’t care.  45 and the people he surrounds himself with have personality disorders – for which, in our society, people are rewarded.  When they break the law, they need to go to prison.

At any rate, despite the daily “oh no he didn’t” reaction that most Americans experience on a daily basis, as 45 lurches from one manufactured crisis or outrage to the next, this most recent weirdness is a step beyond what we’ve seen so far…

…he now insists he has invented a new celebration – fireworks and a parade on July 4th, in D.C.

Side note #2: Of course, we all know that July 4th celebrations have been going on since the 18th century.  For a chronology of the celebrations, see the Fourth of July Celebrations Database.

That’s right.  According the Rachel Maddow, on her show last night (February 12), “Trump Announces Plans for 4th of July Festivities That Already Exist”.  Here’s what he said:

“We’re thinking about doing, on the 4th of July or thereabouts, a parade. A ‘Salute to America’ parade. It will be a – really, a gathering, as opposed to a parade, I’d guess you’d have to say. Perhaps at the Lincoln Memorial. We’re looking at sites. But we’re thinking about doing something, which would become, perhaps, a tradition. ‘Salute to America’ on July 4th or July 4th weekend. Somewhere around that area.

“And, [acting Secretary of the Interior David Bernhardt], you’re taking charge of that and you’ll see how it works out with schedules and everything else. And I think it could be a very exciting day.”  – MSNBC website, 2/13/19.

I was initially perplexed by this.  Is he deliberately lying, and trying to convince people that we don’t already have a tradition of celebrations on July 4th?  Is he exhibiting some form of dementia and doesn’t remember that this holiday is celebrated?  Is he just incredibly stupid, and has no idea that July 4th is even a holiday?

Side note #3: I can’t possibly believe this last one, because banks aren’t open on July 4th, so he certainly knows it’s a holiday, if only for that reason.

Considering how often 45 lies – an average of 15 lies per day in 2018 – it doesn’t surprise me all that much that he would claim to invent something that he didn’t.  What surprises me is the reaction staff had to this clearly false statement:

“Salute to America is a great idea.” – Spokesperson for the Interior Dept, as reported by CNN article “Trump Floats ‘New Tradition’: 4th of July Parade That Already Exists”, Maegan Vazquez, 2/13/19.

And therein lies part of the problem – no one who works in this administration is ever willing to correct 45 when he lies.  No one.  I think we can all safely assume that no one has ever corrected 45, throughout his life, about anything.  This is how bullies operate.

Bullies with money and power get to force their version of “reality” on the people over which they have control.  In the case of 45, that’s all of us.  It’s like that ridiculous book “The Secret”, on steroids.

“Inventing” a celebration that already exists really isn’t that big of a deal.  In fact, to many, it’s laughable – another example of the buffoonery that characterizes the installed president.  But it’s the way he attempts to redefine the world, and the way everyone around him (who also have power) enables that, that’s the real danger here.

It’s the basis of the “fake news” charge, for another example.  He doesn’t really believe CNN is “fake news”, as he admitted to in an interview with Leslie Stahl.  No, he uses the charge of “fake news” to discredit the news source:

“I do it to discredit you all and demean you all so when you write negative stories about me no one will believe you.” – “Lesley Stahl: Trump Told Me He Uses Term ‘Fake News’ To Discredit The Media”, Ian Schwartz, RealClear Politics website, 5/23/18.

Right there, he’s telling the world that he lies in order to subvert the First Amendment, and to reinforce that his is the only “true narrative”.  That’s extremely dangerous.

As time goes on, his lies become more outrageous, more clearly false, and much more dangerous because some people are not challenging what he’s claiming.  And by “some people”, I mean people that large numbers of the citizenry listen to and/or read.

Yeah, usually on cable news shows, this kind of stuff is brought up on a daily basis.  But it seems as if there are predominantly two reactions to it now – either laughter and derision, or “panels” that feature “both sides” (people struggling to present the facts, and people who defend 45 no matter how much he lies).

Neither reaction is helpful.  Both just polarize people more, do nothing to educate anyone, and often exhibit the attitude that “we all know better than the audience anyway, since most Americans don’t pay attention to this stuff”.

Side note #4: Then we have MSNBC on weekday evenings, which consists of reporters/hosts trying to objectively discuss and make sense of things (Hayes, Maddow, O’Donnell, sometimes Matthews and Melber).

As 45’s lies become wilder – with him just spouting off whatever nonsense comes to mind in some kind of fascist stream-of-consciousness bullshit – the people around him steadily work on the agenda of dismantling the good aspects of government, ripping off the American people, enriching the 1% and their cronies, and imposing their restrictions on freedoms we are all guaranteed under our Constitution.

And sowing confusion throughout the world.

Weird news of the week: From the website IFLScience, some really interesting and encouraging news about thought-to-speech technology, which could ultimately be used to assist people who can’t speak (people with ALS, for example).  The AI reads brain patterns and translates them into speech.  Right now, the program just reproduces numbers, but as the neural networks are trained in more complicated speech, people will be able to express requests and ideas. (‘This Ground-Breaking Technology “Translates” Brain Patterns Into Speech’, Rosie McCall, 1/20/19)

Recommendation of the week: rainymood.com is a site that’s just a picture of rain on a window, the sound of rain, and a mellow tune.  Nice to have running in the background, if you don’t have one of those sound generators.

2 thoughts on “Land of Confusion, Redux”