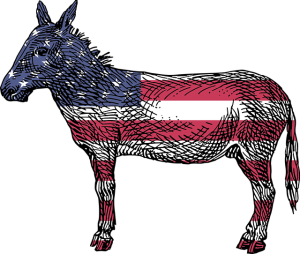 Aside #1: I would have used Pittsburgh news sites for the story, but none of them are reporting it except in terms of how the Republicans are challenging it (“GOP Gearing Up to Challenge District 18 Results, Impound All Voting Machines Used in Special Election”, Chris Potter, Pittsburgh Post-Gazette website, 3/14/18).

I watched the results come in on MSNBC and CNN.  I turned on local news at the usual time (11PM), only to find that none of the local news channels were covering the special election.

Aside #2: I live one hour east of Pittsburgh/District 18.  Only one channel here is owned by Sinclair – for more information on this right-wing company, see “A Short History of the Right-Wing Politics of Sinclair Broadcasting”, Alex Kaplan, Media Matters website, 7/18/17.  I am at a loss to explain the total news blackout here.

Conor Lamb is not particularly liberal in many of his views.  His first campaign TV ad, for example, featured him shooting an AR-15 (“He still loves to shoot”).

Jobs, health care, social security.  Wants to work with Democrats and Republicans.  Thinks there needs to be new leadership in both parties.  He has repeatedly stated he doesn’t support Nancy Pelosi.  He doesn’t support a ban on assault weapons.

I am shocked, actually, that this TV ad admitted he went to a Catholic school – PA has a history of being virulently anti-Cathoilic; as a matter of fact, it was a main talking point for the KKK here.

Also surprising is that his ad had a couple of African-Americans in it.  I assume that was a nod to the left-leaning base.  Didn’t want to lose any urban, progressive Pittsburgh voters.

Aside #3: I guess I sound cynical, but I am of course happy he won.  Because he’s better than any Republican.

Most of the district is white, middle to upper class, and retired folks.  It is one of the last bastions of reactionary “values”.  “Trump Country”, people call it.

But the Democrats were smart about this.  They sent Lamb to senior centers – a huge voting block for Republicans all across Pennsylvania.  Lamb also appeared with Jon Bauman of Sha Na Na in various places in western PA (“With Seniors Breaking for Dems in #PA18, Bowzer of Sha Na Na Tours Pizza Parlors of Western PA Rallying Support”, Mike Elk, PayDay Report website, 3/8/18).

Aside #4: I like Jon Bauman.  He is a progressive who knows how to convince people that voting for Democrats means voting for their self-interest, especially elderly folks.  He utilizes nostalgia to promote progressive thinking.  I really do admire that.

Conor Lamb is a mix of conservative and liberal politics (Conor Lamb website).  And that worked in District 18, but just barely.

One of the mistakes the Democratic Party made in 2016 was not sending Hillary here.  Oh, they sent Bill, but he spoke at the AFSCME hall in Duncansville (about 2 miles from here and no, I didn’t go, as I was in the hospital). There was virtually no publicity for it, either.

They should have sent Hillary.  They should have had her hit the senior centers, so those people could meet her.  Most of them only knew what they heard on right-wing talk radio about her.

Aside #5: Every senior center van – the shared ride van that takes people 55+ and people with disabilities to the doctor, errands, and such – has a driver who listens to right-wing talk radio.  Many of these drivers opine on right-wing subjects and spread fake news such as President Obama being a Kenyan.  And most seniors here think all that’s true.  I have met only 4 other Democrats on the vans since I have been riding them in the past 8 years.  And they spoke in whispers, they were so intimidated by the driver and the other passengers.

Sending Bill was not a bad idea, but he didn’t speak in a venue that most people would go to.  He should have hit the senior centers, too, and possibly some local coffee shops/buffet restaurants and other places you find oldsters here.  Maybe hospitals, too, for the medical professionals’ vote.

I want to be clear here – I don’t think the primary reason the Democrats lost Pennsylvania in 2016 was because they didn’t campaign much in central PA.  It was the gerrymandering that gave Republicans an unfair advantage all across PA.  But the way the Democrats campaigned didn’t help Hillary at all here.

Aside #6: Until the citizens won the redistricting fight, PA was considered to be one of the most gerrymandered states in the country (“About Gerrymandering”, no author, Fair Districts PA website, no date).

Those districts have now been redrawn, and by the time this year’s midterms come up, the election results should be a better representation of the voters (in other words, more Democrats will be elected).

But, on a national level, the Democrats are going to have to campaign harder and smarter.  Even with redistricting in PA, the Tea Party is still active and they still mobilize people better than the Democrats do – and that’s going to hurt us down the line.

However, I am torn about all this.

On one hand, I am desperate for the Democrats to wrest control away from the Republicans, because Republican policies are hurting and killing our citizens, destroying our environment and national parks, and encouraging white supremacists to engage in violent acts.

And also making us look pretty stupid and reactionary to the rest of the world.

On the other hand, I am that part of the Democratic Party base that would be considered “the far left” – I support identity politics, for example.

I vehemently oppose Democrats who maintain we have to shut up about racism, sexism, xenophobia, and all the rest of the issues that separate us from “Trump country”, in order to get the white vote.

So, while candidates like Lamb can win elections for the party, I fear what’s going to happen once he and others like him are in office.

Will he listen to the party, or will he stick to the conservative line and vote for Republican policies?

He already stated that he supports tariffs.  He already stated he doesn’t support stricter gun laws.  Both of these positions are disastrous for consumers, most service workers, and people who don’t like being shot by right-wing lunatics.

Is the Democratic Party moving to the right?  Where does that leave a fair number of its base?

There was a recent online town hall meeting with Sanders, Warren, and my favorite panderer Michael Moore – it was about “saving the middle class”.

Is that going to be the theme now?  Forget the poor, the elderly, POC, all the people who are truly disenfranchised – as opposed to people who are taking a hit on their investments, mortgages, and vacation plans?

I don’t like to see anyone hurt.  But there is a vast difference between someone’s mortgage rate going up, and someone who is homeless or can never hope to own a home.  Considering that Republicans are trying to implement policies that can actually result in a lot of deaths, I’m sorry but I don’t give a shit about your investments.

I don’t have the answer to this problem of the split in the Democratic Party.  I don’t think 3rd parties are a good idea, because they don’t get enough votes and they often result in Republicans being elected.

I think Tom Perez is way too interested in toning down the Democratic Party message, and if he continues to do that he might lose a good part of the base.  A base that has nowhere to go now.

Not voting is never an option.  Never.

The issue is which is put first on a scone – jam (for Cornish teas), or clotted cream (for Devon teas)?

This is weird only to Americans, I think.  I like the pictures heh.  Personally, if I could find a decent scone with cream, jam, and a good cup of black tea here, I wouldn’t care which way I put toppings on it.  Sigh.  I really miss tea time.  It’s just not the same here in the US as it was in Northern Ireland.  And I have no idea in what order you put clotted cream and jam on a Northern Ireland scone.

Recommendation of the week:  “Better Off Wed (Annabelle Archer Wedding Planner Mystery, #1)”, by Laura Durham.  Yes, it’s a cozy mystery but it is laugh-out-loud funny, very well-written and doesn’t have the usual clichés.  Great read for a good laugh.