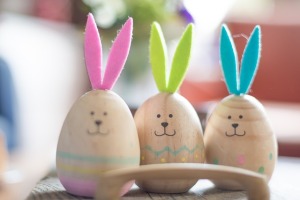 Aside #1: I wonder what all these fundamentalists in Walmart and elsewhere would think if they knew the actual origins of the Easter Bunny, eggs, and so on.  They’d have a fit!

There was an enormous March for Our Lives last weekend, with hundreds of thousands of kids and their supporters marching all over the country, to advocate for gun laws.  Cable news had all-day live coverage, and the organizers (the Parkland school students) were being interviewed quite a lot.

As the country seems to move to opposite positions on gun control, I am actually pleased by this.  I am pleased because the contradiction between positions can’t stay at this heightened awareness for long, and change is coming.

We’ve reached a kind of tipping point regarding gun violence, and it’s about time.  Only the most hardened, stupid, reactionary people would argue against some firearms restriction now.

Those few folks…and the National Rifle Association – which is basically just a firearms manufacturing lobby group – might object, but it’s too late for that now.  No one buys their bs.

Also helping is the information that the NRA has apparently been laundering money from Russia (“Senator Seeks Documents on Russia Money Links to the NRA”, Desmond Butler, Associated Press via the PBS website, 2/2/18).  I’m fairly sure that won’t sit well with most Americans.

I’m not sure what kind of legislation will come out of all this, at least until the Democrats regain control.  I’m glad the dialogue has appeared to move from the “mental illness” emphasis to the “availability of assault rifles” focus.

So, that’s the first good piece of news.

Big news for Tool fans (and I am one of those) – the band is finally releasing a new CD in April.  It’s been 12 years since their last CD.   Also being released next month, a new CD from one of Maynard’s other bands, A Perfect Circle.  It’s been 14 years since they released all new material.

Maybe they’ll go on tour, too, though I doubt I could afford the tickets and if I am still in central PA they most likely won’t play at a venue near me.  Plus, I don’t know anyone who would be willing to take me – Tool has a cult following, mostly comprised of people far younger than I (though Maynard himself is 53).

Great news on the Russian investigation – Mueller’s team wants to interview 45 soon, and 45 doesn’t have decent legal representation.  Most of his legal team has quit, and two of the remaining lawyers – McGahn and Cobb – are attorneys for the office of the presidency, not the for the president himself.   Jay Sekulow is his only personal lawyer left (“Trump’s Legal Team is in Shambles. The Timing is Terrible.” Zachary Fryer-Biggs, Vox website, 3/27/18).

The Mueller investigation is also looking into Jared Kushner’s business dealings with Russia, China, and Qatar (amongst other places), and how these contacts and business deals might be connected to 45 and his election campaign (“Mueller is Taking a Closer Look at Jared Kushner”, Abigail Tracy, Vanity Fair website, 2/20/18).

Terrific news on the fight against cancer:  A Canadian woman is in remission from lung cancer due to a Cuban vaccine.  She had been given only one year left to live, and her husband went searching for a way to help her because the traditional chemotherapy she was receiving wasn’t working.  He found an organization called CubaHeal, paid $135 and submitted paperwork to the company, and his wife was approved for treatment.  So, off they went to Cuba, she got treatment, and now there is no evidence of cancer (“Woman in Remission After Treatment in Cuba”, Colton Wiens, CTV News Regina website, 3/13/18) .

But, thanks to the Idiot-in-Charge, Americans can’t travel to Cuba now (“Trump Administration Sets New Restrictions on Americans’ Business Ties and Travel to Cuba”, Tracy Wilkinson, LA Times website, 11/8/17).  He’s just mad that they wouldn’t let him build one of his monstrosities of a hotel there, so of course everyone else has to suffer (“Trump’s Conflicts of Interest in Cuba, Carolyn Kenney and John Norris, Center For American Progress website, 6/14/17).

I am hoping maybe researchers/drug companies will look at this medication, and make it available here.

So don’t waste your money.  Hey, I think they are nasty-tasting things, anyway, so I am delighted to impart this news to my PCP’s intern, who keeps insisting I take them.

I scoured the internet for more good news, but I was OD-ing on human interest stories, cat and dog rescue narratives, and the like – so that’s all for this week.

Now for the weird news: From Punxsutawney, PA, this great quote – “It’s probably a misunderstanding on their part, because Phil is the messenger.  He doesn’t actually create the weather.”

Pennsylvanians are weird.  Everyone knows this!

Recommendation for the week:  Are you old enough to remember the TV series “The Avengers”, starring Dame Diana Rigg and Patrick Macnee?  I found episodes on Daily Motion!  Here’s the link.  For those of you not old enough, check it out – it was a very amusing, well-written bit of madness and you might enjoy it.